Trip to the Himalayas 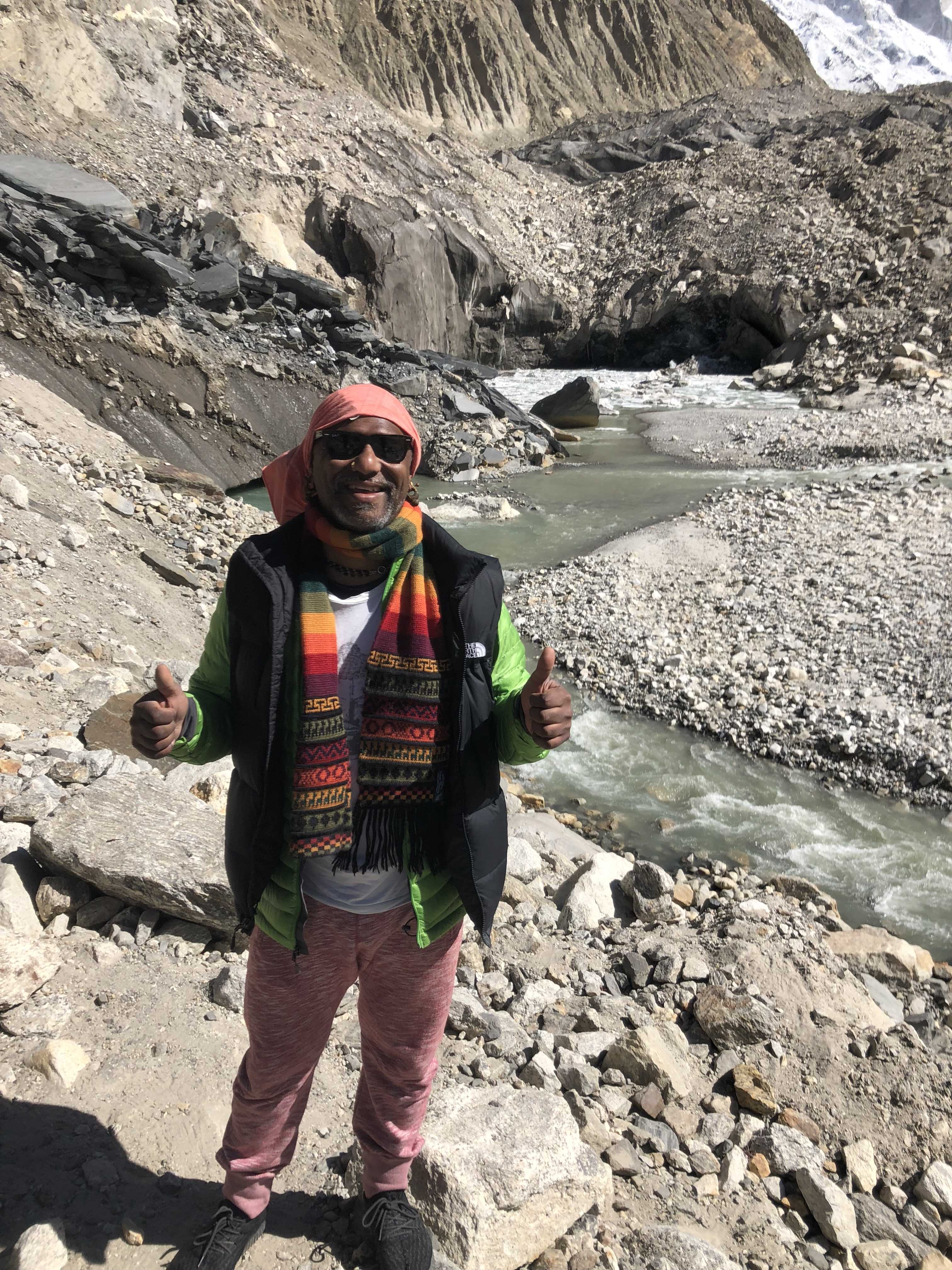 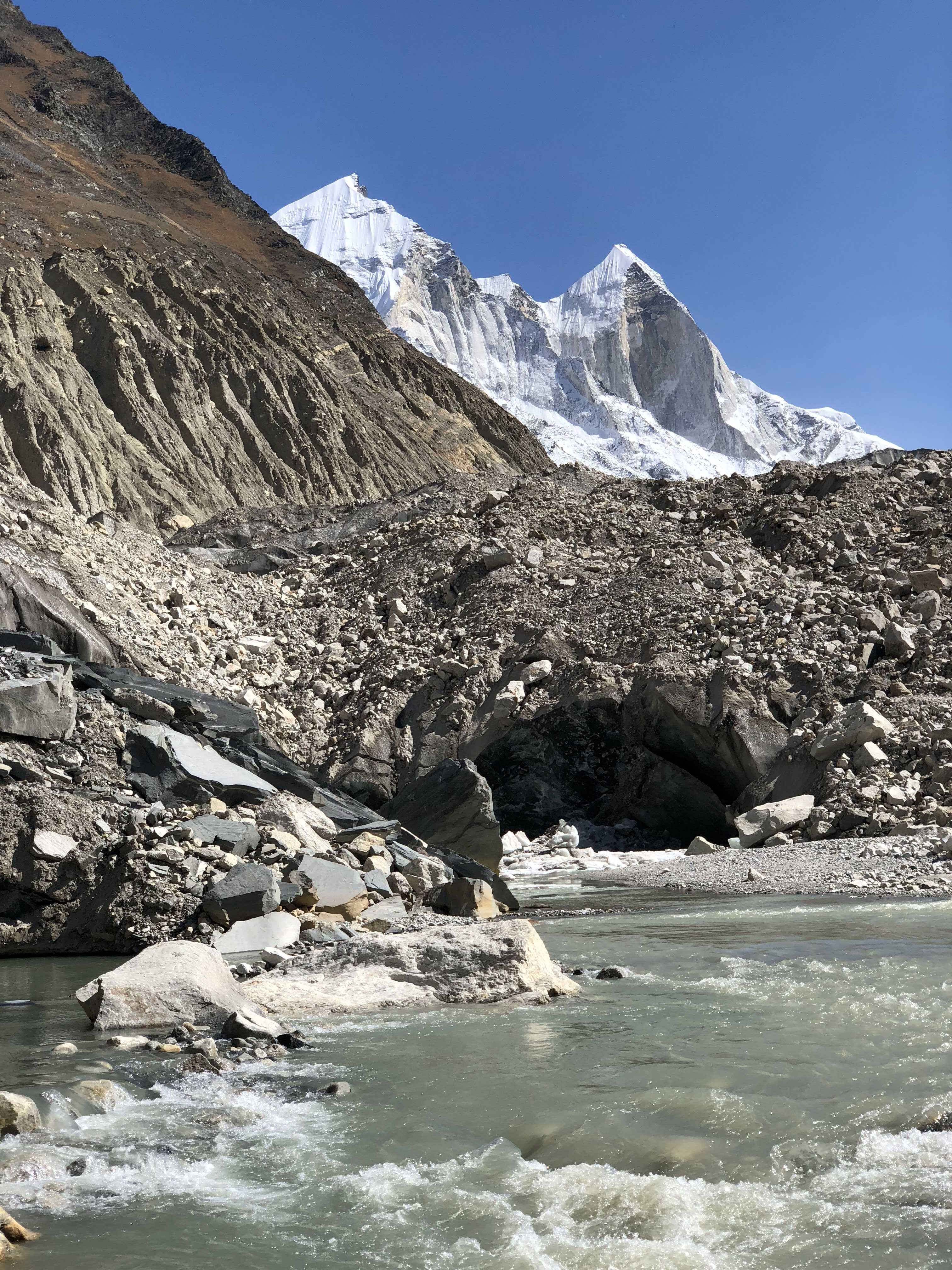 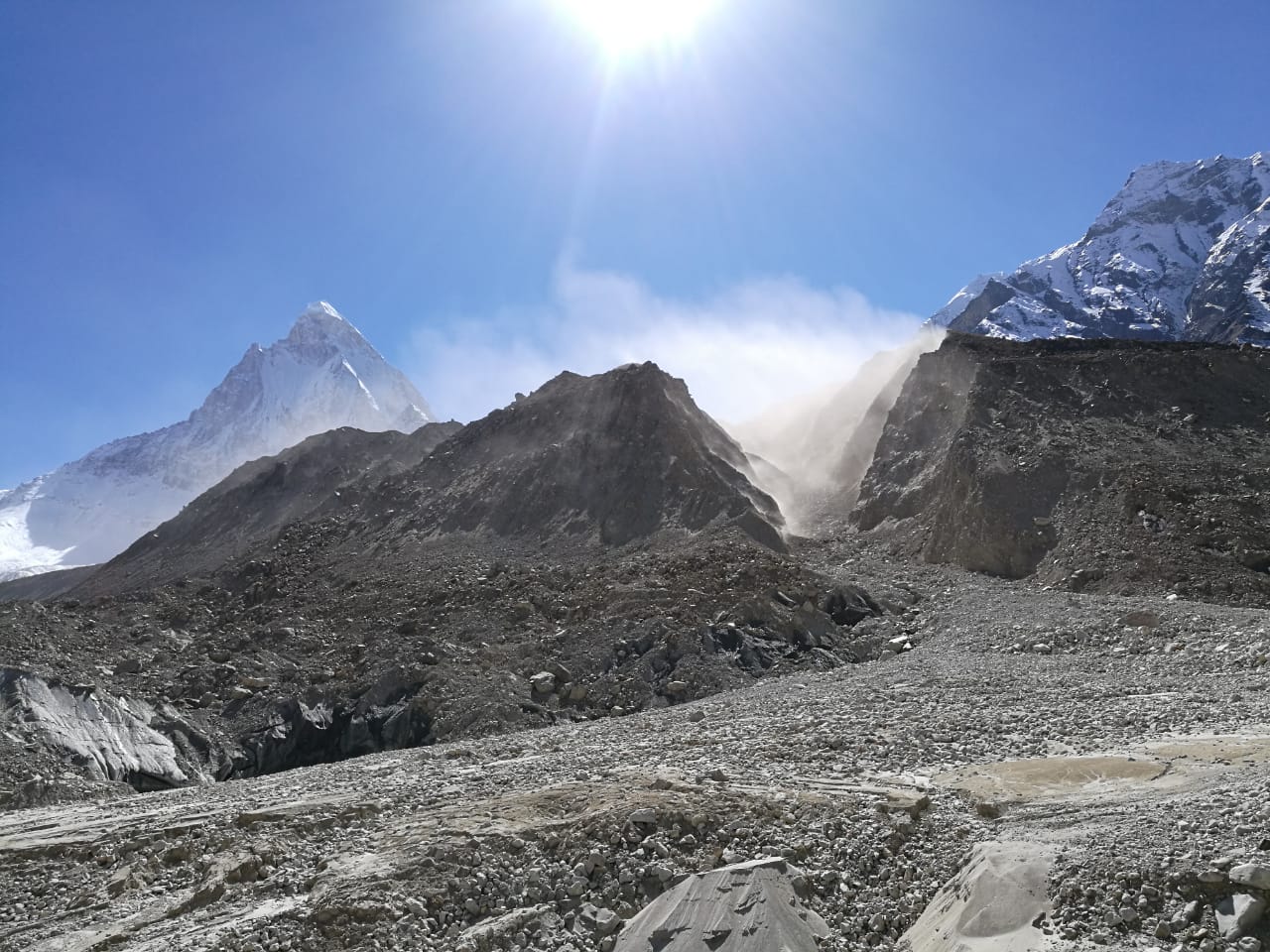 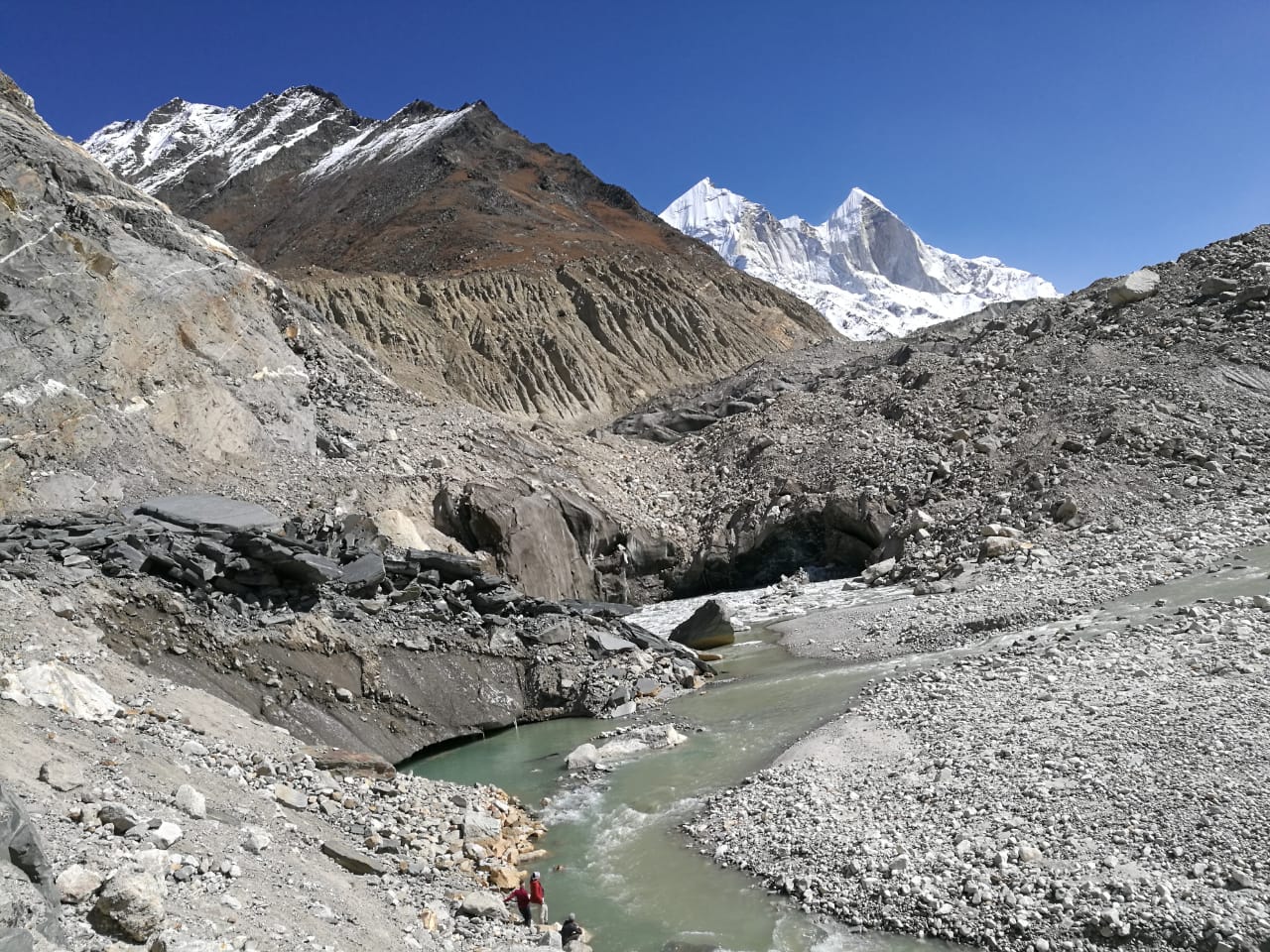 We quickly came to loose stones on the slope of the Bhagirathi Mountain. No path! We advanced carefully and noiselessly as rocks were still coming down. The slap of rocks hitting each other sounded alive! Looking up, I immediately dodged as a fair size one sped towards me. We’d lean on the mountain, advance on rocks that slid away and we’d slip. Below, the Ganga rushed, her current strong. Krishna protected us from a harsh end as my inadequate shoes rolled on unstable rocks numerous times. I guess, we took it a step at a time, believing we’ll be there now. We could not have foreseen the peril. Soon we descended to the river.

This year’s extreme weathering changed the topography. Ganga now surged from 2 rock fissures in Gomukh. Some saw 3 of them! Yet, BBC Ganga says She started from the Gangotri glacier, which retreated 20 km due to climate change.  Lord Shiva caught Her in His dreads at Surya Kund. In the winter when the water level is low, a Shivalinga is visible. Allegedly, She could also come from Tapovan. Personally, it’s all a mystery I cannot understand. On the other side of us, the terrain was level but our guide refused to cross the gushing river. We entered, thigh deep and quickly dipped in her icy waters. We filled bottles, drank deeply and carried some more. A fleeting visit based on faith, and we’re clutching our way back to the top, to the non-existent trail. Our guide misled us and risked our lives when he walked where the old path used to be. We basically rolled across the mountain flank for ½ km while he was like a mountain goat, just like the Sherpas are like human mules. Old people have walked this trail since centuries. I highly doubt they’d both, step on and clutch at, rolling stones. Later, we learnt a hazardous but less volatile trail did run over the glacier. A proper guide would know that. Ganga is an important structure of our Vaisnava culture. Hence, we’d pressed on. Now we hurried, and were soon across the boulders towards Bhojbasa as Vikash inhaled oxygen. There, we met Radhika, Vrindavan Kirtan and young people from All-India-Trekkers who urged us to stay the night at Bhojbasa because starting the ride to Gangotri in the late afternoon could be disastrous. But we were hell bent on going, as we felt quashed by the trip. It had been rather harrowing. At 4 pm, with dread sitting like a brick on our chest, we started our 4-hour ride back to Gangotri, uneasy and unprepared. 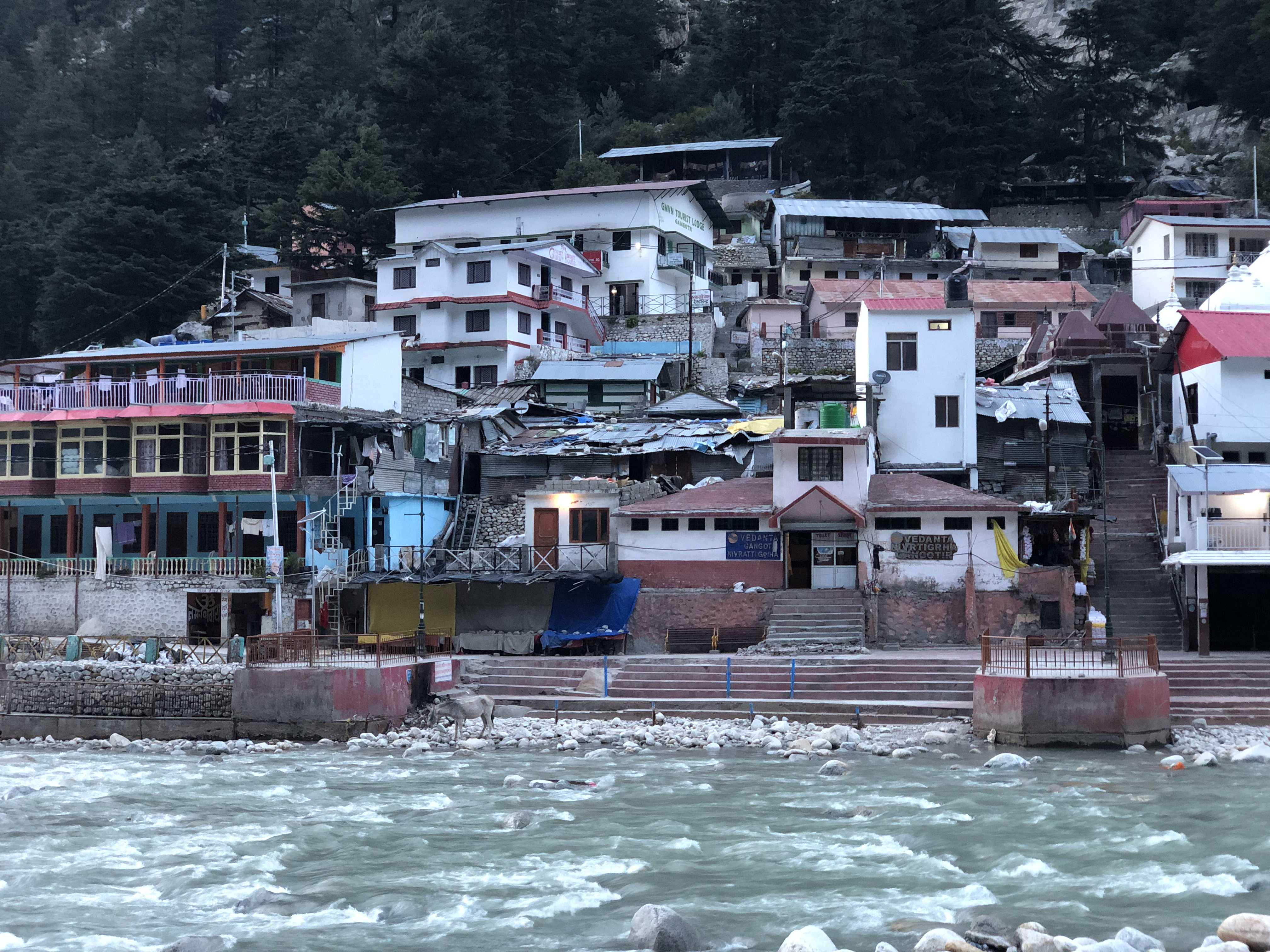 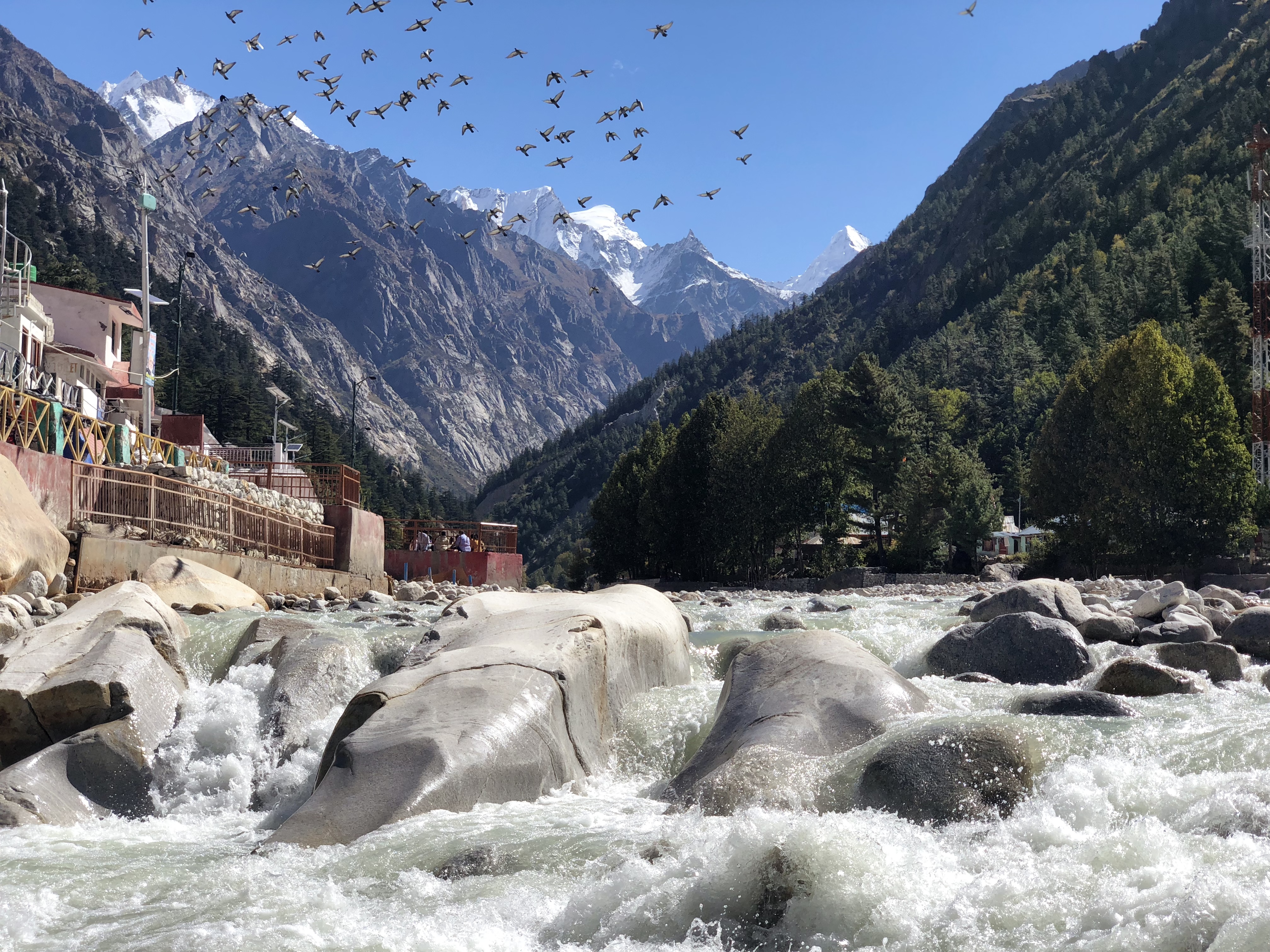 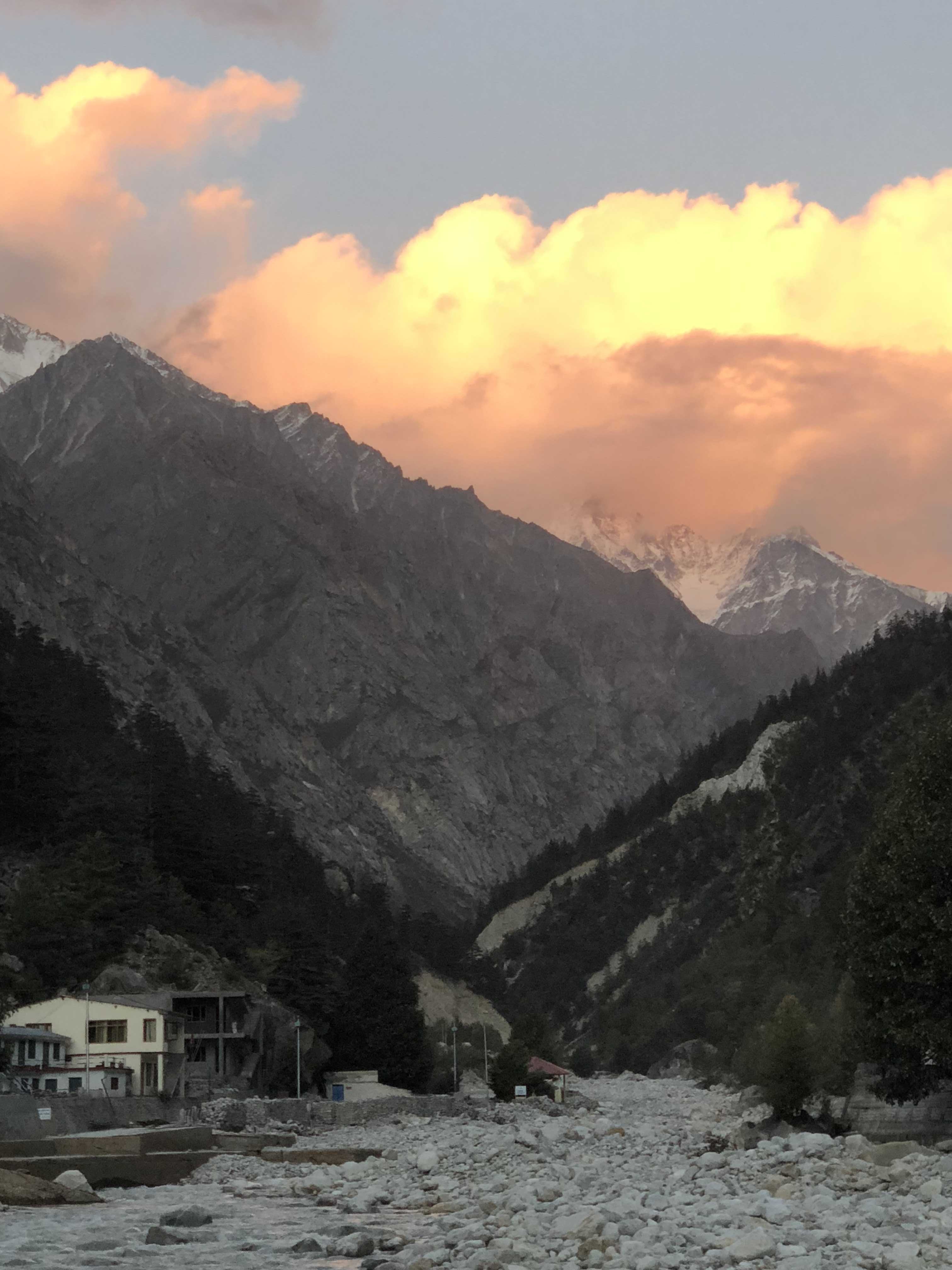 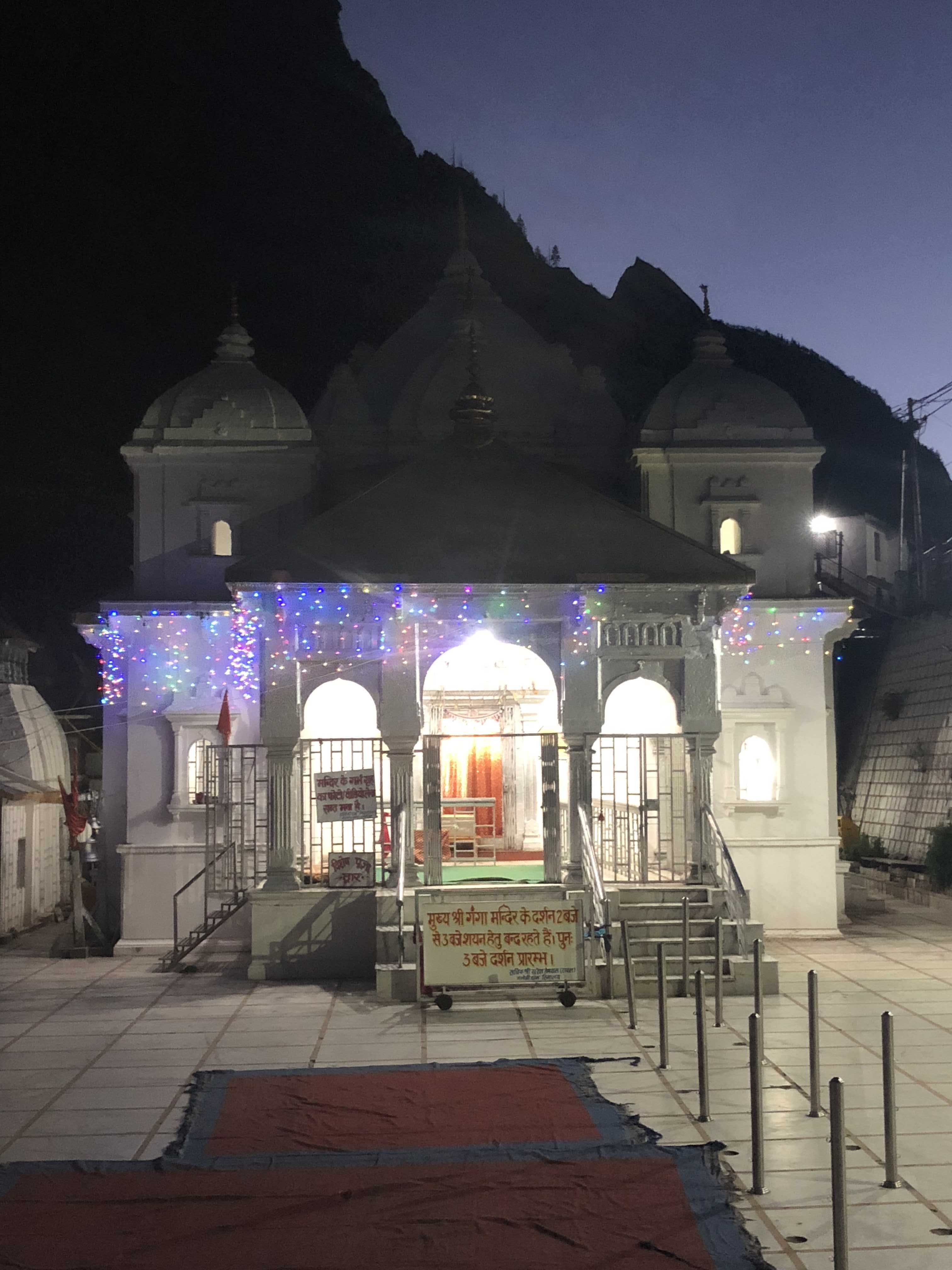 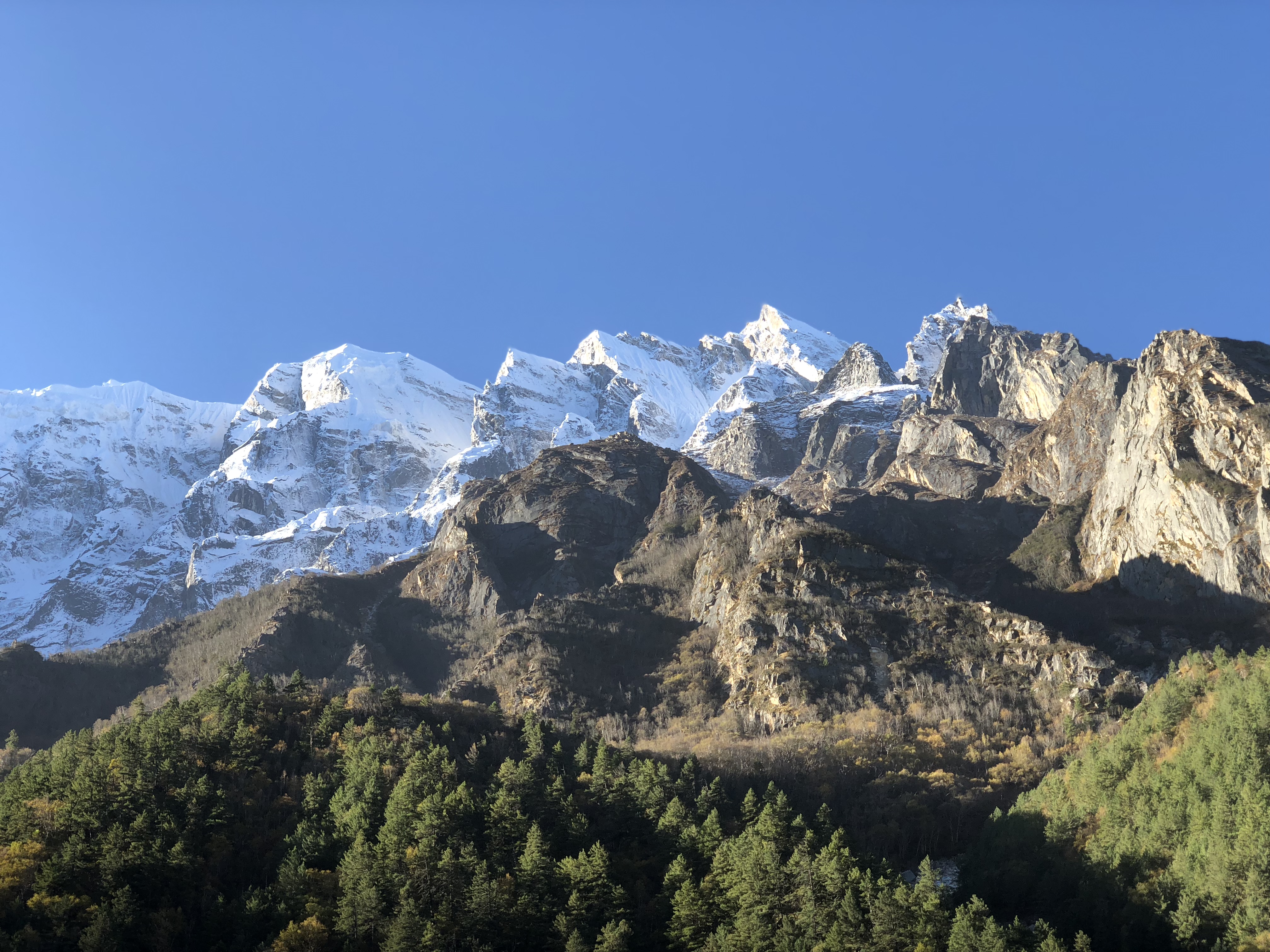 The return journey petrified us. It seemed the path had narrowed with extra tight bends and low overhangs. Also, our mules liked the brink. Vrindavan Kirtan’s mule would graze below the edge. He yelled at the handler to control the animal. The man cheerfully replied – no problem; if you go down, you go up! Most of the way was abrupt, deep precipice. Dusk arrived as the sun moved behind the mountains, and we came to the danger zone. Too late, no time – said the handlers, as they urged the animals on to the steep incline. Vikash almost came off his saddle. Behind, Radhika chanted Hare Krishna interspersed with Krishna, Krishna Maha Baho. Later, she told me her mule had stopped midway, legs shaking. Steps were hewn in the rock and they were sheer and smooth. A short backward slide to the bend below and none would survive. The handler gently coaxed the animal on. Radhika wondered how it would feel to smash on the boulders at the bottom and remembered Lord Vishnu rescuing Prahlad when he was thrown off the mountain. We were still 2 hours away and darkness dropped.

Besides, cold invaded and froze our limbs. Vrindavan Kirtan rode in front and shone his phone torch. At once the handler told him to put it off or the animal will follow the light off the mountain. We still had rivers to cross, unsafe paths, hairpin bends, overhangs to knock us off our mounts, capricious mules brushing against mountain, catching and twisting our leg at the knee, and the saddle felt like iron digging in our butt bones. Thus, while trailing in the dark in utter misery, some one said to look up. At once, the sight of so many bright stars, so close, a detailed milky way, the inky blue-black sky and the outline of these magnificent mountains captured and fascinated us. Here, Vaikuntha is not far. It is the destination of Saints as nothing panders to the body. We rode on to our destination, feeling close to God.

Words cannot adequately describe the ordeal. Nothing had prepared us for this journey. Advice of friends who’d hiked before was inapt. Record rains had changed the terrain. Rockslides were still reshaping it. Veteran hikers told us they’d never attempt the ½ km before Gomukh the way we did. I would strongly advise future hikers never to ride mules on those risky, unsafe trails. Better to walk and spend the night in Bhojbasa. Back in Gangotri we heard 2 mules had thrown their human loads off the mountain some days before. MVT manager, Govinda, recalled his trip earlier this year. Mules had run amok, brutally slamming him and his friends into the mountain. Had they been edge side …!

Yet, such pilgrimage shows the reality of the spiritual coming down to mortal realm. Our lives are committed to Prabhupada’s mission and we acted in naïve ignorance. Had we known the degree of risk, we’d never have ventured beyond the last ½ km to Gomukh, or rode on mules!! We rested in Gangotri for 2 days before leaving for Rishikesh. Driving down the mountain, ravine side didn’t ease the tight knot in the chest.

Besides no one obeying traffic laws, India could have the worst of bus drivers. Though we encountered little traffic driving away, we still felt stressed, as vehicles coming at us seem to force our car to the brink. After a sharp curve our driver stopped for us to look down the canyon. The broken carcass of a van was still there. Few days ago 14 people had perished. It is a road from hell, leading to heaven. A brief stop to dip in the hot Springs at Ganganani and we were off to Uttarkashi where we spent the night. Here Ganga trickles down as dams hold her captive for various uses. Still, several streams again join her, swelling Her waters but altering Her temperament and color. No more is She almost white, nor does She dance Her way down. The next morning we started early, relieved the frightful mountain road was behind. Pure delusion!! We’d climb to the top of a mountain, come down and go up another one, and another one and …, for 5 hours! Often we failed to see the bottom of the chasms. One time we saw cranes pull up a bus from down. It had compressed to about 4 feet high. No survivors! The roads to Rishikesh were worse and it felt like a 5-hour tooth extraction – angst, nerves, and trepidation.

In Rishikesh we stayed 5 days on the banks of the Ganga, soothed and solaced by Her. Closer to Her birthplace She moves about playfully, Her transparent icy grey-blue waters is sweet ambrosia. Here, She seems sober, Her mercy, formal and her water has a taste. Yes, I would like to go to Gomukh again and Tapovan. Ganga is closely related to Krishna in various pastimes, up to Chaitanya Mahaprabhu bathing in Her or depositing love of Krishna for Narottama in Her waters. We pray our pilgrimage to the place of Her appearance earns us Her willingness to remove our many sins from countless of lifetimes, so we can chant with attachment to Krishna and serve Him in any condition and/or situation. Still, the big question – did the trip contribute to our devotional practices. Since we began our Karthik Nama seva, images of Gomukh Ganga come to mind. I have yet to understand how such an externally arid, lonely, desolate place fills the heart with the warm desire to serve with attachment. We humbly desire the day when our devotion issues forth from Krishna’s toes and flows unhindered back to His Lotus feet.

Trip to the HimalayasMayapur
Scroll to top